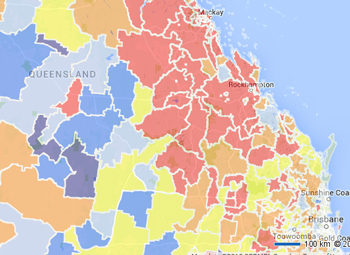 The strongest swings against the ALP in 2012 were from Labor’s own 2009 Labor voters. This swing correlation of minus 0.67 from Labor’s Queensland state 2009 support base was even bigger than the swing correlation of minus 0.57 against the NSW ALP from its support base last year. In other words, the biggest swings against Labor were in its safest seats.

On Election Day, March 24, Labor lost 15.6 percent of its 2009 primary vote, taking it from 42.3 percent to 26.8 percent. This is more than one in three former state Labor voters. Of the 89 seats contested by Labor, the Labor Party did not win more than 50 percent of the primary vote in any seat. The highest primary vote was 47.4 percent in Woodridge, one of the eight seats retained by Labor.

What to you want to find?